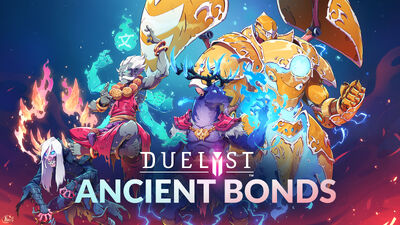 The third expansion set for Duelyst

Ancient Bonds is the third expansion set for Duelyst released March 2017 in Patch 1.82 and contains 39 cards. The expansion adds a lot of Arcanyst and Golem minions. Its theme is about minion tribes. It also introduces a new keyword mechanic Bond which triggers a special effect when this minion is summoned whilst at least one other minion from the same tribe is on the board.