Welcome to Duelyst! This page contains introductory information for new players as well as links to more detailed sources.

A short summary of the basics you can find here.

Duelyst is an online collectible card game (CCG) with a board. Play is generally head-to-head between two humans, although some modes allow human players to compete against AI opponents.

To play the game, you need to use one of the clients. You can download the standalone clients for Windows or Mac by follow this link and clicking “Play Now.” The steam client is available here. Depending on your computer's specification, you can also play in Google Chrome here. Mobile only works through some workarounds. Once you have downloaded the game, follow the prompts to create an account (or link an existing account) with Bandai Namco, the game’s publisher. 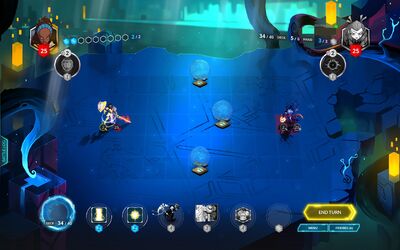 This is a very brief introduction to Duelyst's gameplay. For a more detailed description, see the gameplay page.

Duelyst is played between two players on a 9x5 board. At the beginning of the game, the board is occupied by the players' Generals. The goal of a game is to reduce the health of the other player's general to 0.

Each player starts with a deck of cards. Cards come in three varieties: minions; spells; and artifacts. Play takes place in turns. On their turn, a player may move their general and minions and attack adjacent enemies with their minions and general; summon new minions adjacent to their general, cast spells, and equip artifacts to their general. The player may also replace one of their cards. The player's actions are limited by the amount of mana they have and the number of cards they hold. There is also a time limit of 90 seconds per turn. The amount of mana available to the player increases every turn until it reaches its maximum. Players can also gain a one-time boost to their mana total by capturing one of the mana springs around the center of the board. Players draw an extra card from their deck at the end of their turn.

These general rules are subject to exceptions. Many minions have abilities that alter the normal rules of gameplay. Spells and artifacts can also alter the game's basic rules. Common abilities are indicated by "keywords" on cards. For example, a minion with the ranged keyword can attack any enemy, not just those adjacent to it. More unusual abilities are described in text on their cards.

Ranked is a ladder mode: you are placed in one of five divisions (from lowest to highest: bronze, silver, gold, diamond, and S-rank). You play Ranked mode with a deck of forty cards from your collection. The game's matchmaking system usually matches you against players from your division. Winning games grants you chevrons; losing takes them away. Earn enough chevrons and you advance to the next division. Once you move into a new division, you cannot drop out of it. Every season (every calendar month) the ranks are reset and players are given Ranked rewards depending on the rank they reached.

Gauntlet is a draft mode. When you enter Gauntlet, you draft a deck of 30 cards from a random selection of cards offered to you by the game. Your Gauntlet run continues until you have lost three games or won twelve games. The matchmaking engine attempts to match you against players with a similar number of wins. Players are given Gauntlet rewards depending on the number of games they won. You can only draft cards from the Standard set in this mode. 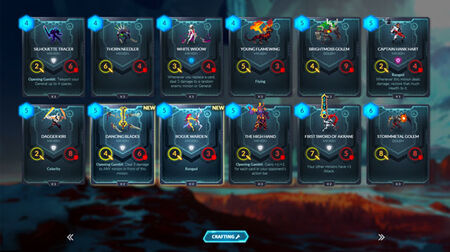 As you progress in Duelyst, you can unlock more cards and can obtain other in-game items.

Here is a great F2P guide which tells you how to get the most out of Duelyst without any money.

Tips for building your collection[]

The game has six factions, each with its own identity. Here is a 'very' brief overview; you can learn more about each faction at its faction page. Although this section attempts to characterize each faction’s playstyle, deckbuilding is flexible enough that reasonably strong decks can be built for any faction with any playstyle. This section also ignores more specialized (and expensive) decks that new players are unlikely to encounter in their early games

What faction should I choose?[]

Here is a quiz to help you decide on which faction to try first.

Deckbuilding is a rich and complicated part of Duelyst. See the wiki's deckbuilding links for more information and analysis.

You can view your decks by clicking on ‘collection’ on the game’s main screen. There is a tab for ‘starter decks’ — you have six; one for each faction. There is another tab for custom decks. A deck consists of 40 cards. One card is your general; the other 39 can be chosen from the cards in your collection. Each general can choose from their faction's cards and neutral minions.

You can have only one general in your deck; for any other card, you can have up to three copies, as long as you have those copies in your collection.

Duelyst is an incredibly rich and deep game. See the wiki's new players' guides collection to learn about important basic knowledge for the game. The wiki's guide links offer even more resources to help you improve in your gameplay or find excellent decklists.

You also could ask an experienced player to help you out. For that look at the Mentors page.